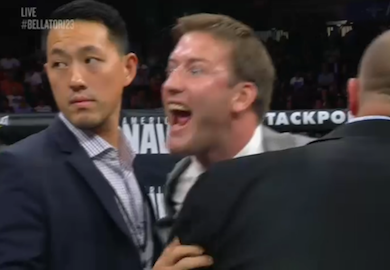 “Scott Coker, I apologize to you. It never crossed my mind that you would get blamed for it. I thought people would realize it’s me from the get-go.”

“This was 100 percent our stunt, and just the fact that they think that him and Spike TV collaborated and wrote this up, c’mon. It’s (Coker’s) first Bellator show, the guy has got a lot to focus on. I’m sure part of it was, ‘Hey, we’ll have these two come in the ring and announce the fight.’ He had better stuff to do, and that’s not him.

“Scott’s not the kind of guy who would write something or bring up Jenna and insults the way he did, c’mon. That was pretty bad. If anyone knows me, they know that that’s a work of art.”