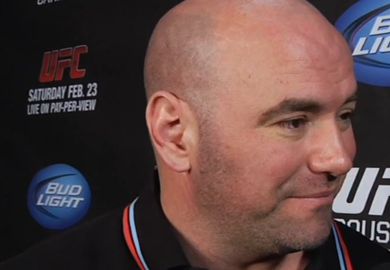 During a guest spot on Jay Mohr Sports on Fox Sports Radio, UFC president Dana White announced that an innovative stem cell procedure had cured him 100% of Meniere’s.

White explained what exactly this disease was and how it affected his lifestyle. White’s lifestyle is one filled with constant travel and seemingly endless work so upon reading this quote, one could see what a hindrance that this disease surely must have been:

“Meniere’s disease is nerve damage inside the ear. And what happens is the nerve starts telling the brain that you’re moving when you’re not moving, your eyeballs start fluttering back and forth, and the room is spinning a hundred miles an hour. If you don’t close your eyes, go into a dark place and lay down, you literally start throwing up. You can’t stand, you fall down, it is horrible. And sometimes when I get hit with it, I’m down for 8-9 hours at a time,”

As many MMA fans are aware, White had a surgery that was supposed to correct this disease some time ago, yet this corrective surgery apparently worsened the effects of the disease for White:

“So it’s funny because you ask me this question, I had the surgery for it which is the new surgery where they go in and put a stint inside your ear. So it’s basically like having brain surgery and the surgery did not go well for me. It did not help me at all. It actually made me worse. And I was living a pretty miserable life.

As for how White heard of this life-altering procedure, none other than Yankees third-baseman, Alex Rodriguez, contacted  White stating that both himself and Los Angeles Laker, Kobe Bryant, had sought stem cell treatment abroad and gave White details, much to White’s delight:

“Well, A-Rod from the Yankees, hit me up and told me that when he was hurt Kobe called him and they both went to Germany and did this stem cell stuff. Right. So he says listen bro, I don’t know if this is going to help you, but I’ll tell you what it’s worth a shot. Well long story short, we had the fight out to Sweden. I went to Germany. I got the stem cells. Dude, I am 100 percent cured.”

Now, White seems to be back to his normal self as he continues to enjoy his brief lifestyle outside of work:

“I am 100 percent a new guy, man. I’m working out again. I’m doing all the things that I used to do. I’m traveling. My life is back,” White said. “All they do is they go in there, they take your blood, they incubate it, they spin it and add stuff to it. I don’t know what the hell they do, I’m no scientist. I’m a million bucks now, man. I couldn’t feel better.”

I speak on behalf of the entire BJPENN.com staff when I say good luck to Dana White on his recovery and we wish him nothing short of the best in the coming months.