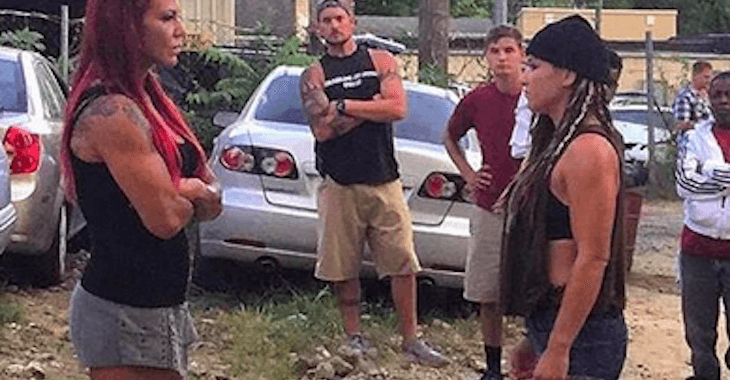 Cristiane “Cyborg” Santos’ hopes of finally getting to face Ronda Rousey went up in smoke after Holly Holm was named as the next contender to the UFC Women’s Bantamweight Title. That doesn’t mean “Cyborg’s” hopes of becoming a UFC fighter aren’t going to happen, though.

UFC President Dana White admitted that he would need to see “Cyborg” make weight and fight at bantamweight at least once before he lets her fight one of his biggest stars. Who better to welcome “Cyborg” to the octagon than Miesha Tate? Tate was snubbed of her position of number one contender in favor of Holm and she is looking for redemption. Both women have agreed to the bout, so maybe it’s time to make it official?

Both “Cyborg” and Tate are filming an upcoming movie called “Fight Valley” and someone captured the two staring each other down. “Cyborg” looks HUGE compared to Tate… do you think she can actually make 135?

If the two were to face off, who do you think would walk out with the win? Share your thoughts and predictions in the comment section below!