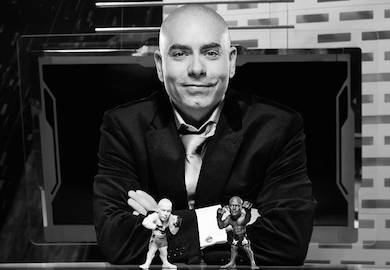 The final airing on October 01st, was a heart breaking one to record, but I am proud of the work that the Team was able to accomplish over the years.

Over 275 episodes, saw us travel all across North America, covering the Ultimate Fighting Championship, as well as many local and international grass roots / top tier MMA promotions.

We reached as far as Tokyo, where despite being sent overseas alone, I met up with with Rick J. Lee, ( a resident of Huntington Beach, California, now a dear friend ) to cover UFC 144: Edgar vs Henderson, from the legendary Saitama Super Arena in Japan.

If it was a big UFC event, we were there. Our tenure: UFC 93 to UFC 177. Pretty good bookends if you ask me, although my personal journey with the network started at UFC 79; a special event where I made the pitch to them, that a thirty minutes MMA magazine show would be a profitable venture – thankfully, they agreed.

We profiled every big name and nearly every title contender, TUF Winner and “up and comer” that stepped into the octagon.

We featured virtually every angle of the sport: from a fighter’s perspective, be it mentally or physically, to those of the promoter, the athletic commission, the sponsors, the coaches and trainers, as most importantly, through the eyes of a fan.

The success and popularity of the show in Canada was a direct result of the UFC’s PR staff, both from the Canadian Team, and the one housed in Las Vegas. Truth be told, even the international teams would go out of their way for us, to ensure we had access to tell the stories we wanted to share.

My only regret was losing the constant battles (and now the war) to showcase the show internationally. We were the best kept secret in MMA, trapped in a geological bubble.

Not many know, or even realized, but “UFC Central” was the only show on the planet, that was granted permission to use the infamous three letters: “U – F – C”.

No one else was allowed to do so, until FOX created “UFC Tonight”. It is and always will be an honour, for this simple Canadian, to be associated the closely, with the Zuffa brand.

This was a direct result of Dana White and Lorenzo Fertitta’s blessing, knowing full well, that “The Mecca of MMA” (at the time), needed more of a brand push, than just the show’s original name: “MMA Connected”.

Along the way, it changed to “UFC Connected”, then, in October of 2011, the final upgrade, “UFC Central”, to align itself with the other Sportsnet magazine shows.

There are countless people I would like to thank, and I will do so in person, but the heart of it all were those who helped take my idea, and turn into a reality. Notably, Bob Torrens, the man behind all things “Showdown Joe” and all things “UFC Central”. My friend, my mentor, my original producer and the man who challenged and forced “the A-game” out of me.

My producer, the incomparable Jacob Clark, who made living my dream a reality, making my “easy life” even easier. Look up “Calm before the Storm”, and Jacob’s picture is used as an example.

He captained the “UFC Central Ship” while helping Associate Producers Jim Cotton and Joe Cervenka develop into the true studs they are today.

Cotton, arguably one of the most creative minds I have ever worked with, and Cervenka, the story teller with unmatched writing skills, joined Clark in far too many baby sitting sessions, keeping me grounded and aligned, whenever I would switch into “fight mode”, anytime, anyone, dared to mess with the final “UFC Central” product.

The synergy was perfect – so much so, that we became a self-sufficient unit at the network, working quietly behind the scenes, putting forth the best product we could.

Look closely at the evolution of the product, and you will also see other shows on the network, mimic what became segment standards (audio and video) on our show.

For the most part, we were a four man team, that navigated the turbulent waters that come with sailing the seas at a main stream sports network.

Clark dealt with the masters of every department, be it sales, graphics, editing, cameras, control rooms, communications and more.

Cotton and Cervenka stepped up when asked, but for the most part, were in the trenches, working away, every day, to ensure perfection on every episode.

In doing so, the three of them, allowed me to focus on being the best that I could be, but the reality was simple: if I ever stood above the rest, be it my peers or competition, it was because they carried me on their shoulders. They lifted me above the pack. Without them, I would not be me.

The removal of “UFC Central” was a business decision made by the network last month, one I fully understand, and one I would have made myself, if I was in a position to make such a call.

This is a business, first and foremost, so understanding the logistics and the true bottom line, is what is making things somewhat easier, during this difficult transitional period I am going through.

The good news, is that “UFC Central Radio” will continue on Sportsnet 590: The Fan.

My contributions to Sportsnet.ca will be ongoing as well, so I will not be leaving the MMA scene, anytime soon.

Despite the old adage “all good things come to an end”, over the past month, I have simply reminded myself that the final chapter of my book is far from being written. This is simply one chapter ending, which is an opportunity, for me to begin writing the next one.

I may be saddened that my “full” dream is no longer a reality, but the day I received the news, I pulled up an old quote, one that has helped me remain focused, during every difficult and dark time I experienced over the past 15 years:

““The longer I live, the more I realize the impact of attitude on life. Attitude, to me, is more important than facts. It is more important than the past, than education, than money, than circumstances, than failures, than successes, than what other people think or say or do. It is more important than appearance, giftedness or skill. It will make or break a company…a church….a home. The remarkable thing is we have a choice every day regarding the attitude we will embrace for that day. We cannot change our past…we cannot change the fact that people will act in a certain way. We cannot change the inevitable. The only thing we can do is play on the one string we have, and that is our attitude…I am convinced that life is 10% what happens to me and 90% how I react to it. And so it is with you…we are in charge of our attitudes.”

The final, and most important “thank you”, goes out to YOU: the reader, the fan, the viewer and the listener.

I am eternally grateful that you have allowed me into your home to help tell you the latest and greatest from the world of Mixed Martial Arts.

You have many options, but you often chose “UFC Central”; from the bottom of my heart, I sincerely thank all of you for your support over the years, and especially during these past few weeks, and no doubt, the months to come.

No matter how long you’ve been on this ride with me, keep your seat belts fastened. I assure you – it’s not over yet.