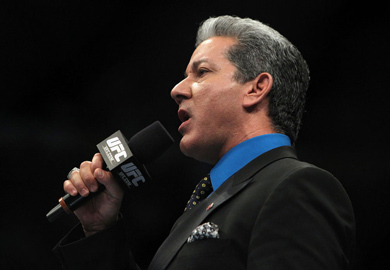 During a mixed martial arts fighter’s walk-in, the buzz within the grand hotel casino’s arena grows in anticipation as the fighter walks towards the UFC prep point. As both competitors separately enter the famed octagon, the crowd goes frantic while vehemently cheering on their favored fighter or violently jeering for a despised antagonist. A split-second silence ensues that creates a calm-before-the-storm atmosphere. The arena’s massive speakers warm up with an ear-piercing feedback while the crowd gets more anxious with every millisecond. And then, madness happens. As Bruce Buffer robustly hollers his salutation, “Ladies and gentlemen, we… are… live!”, every single soul in the room gets that certain spine-tingling, goosebump-inducing, and adrenaline-injecting sensation that draws the vivid picture of a highly-anticipated MMA bout.

Widely regarded as the “Veteran Voice of the Octagon,” Bruce Buffer has been the official octagon announcer at UFC events for 17 fruitful years. Possessing the same enthusiasm as his half-brother and renowned boxing announcer Michael Buffer, Bruce belts out his signature catch phrase “It’s time!” with absolute gusto before introducing the energized octagon warriors to the equally keyed up MMA fans. His move aptly called the “Buffer 180” has also been a trademark and a fan-favorite. He even went the extra mile and did a “Buffer 360” during the main event of UFC 100. A lot of people know Bruce Buffer for his unmatched vigor on the microphone and at the octagon, but only a few are aware of his very competitive streak in the poker circuit.

Bruce Buffer is a world-rated professional poker player and is regularly seen competing in the World Series of Poker Main Event and on the final tables of the World Poker Tour tournaments. In a pool of diverse card sharks that ranges from Party Poker patrons dipping their feet in live poker, to the present and future batches of poker Hall of Fame enshrinees, Bruce Buffer can hold his own and swim in the perilous oceans of major poker tournaments. He began to truly showcase his wide array of poker arsenal when he went toe-to-toe with legendary world champion Chris Moneymaker during a televised WSOP Main Event in 2007. Bruce Buffer even competed in the short-lived poker TV special entitled “Poker After Dark” where he was pitted against fellow mixed martial arts personalities and professional poker players. In the event, Buffer placed second after succumbing to top poker pro Howard Lederer. To add to his already impressive poker resume, Bruce Buffer outlasted poker prospects Patrik Antonius and Erick Lindgren as well as multi-division former MMA champions Randy Couture and Dan Henderson.

The thought of competing in a poker event provided these past and present UFC personalities with an outlet to test their mental fortitude against some of the world’s most aggressive chip hunters. For Bruce Buffer, the effective shift of his octagon fervor to the felt table has garnered him an esteemed recognition in both the MMA and poker world.