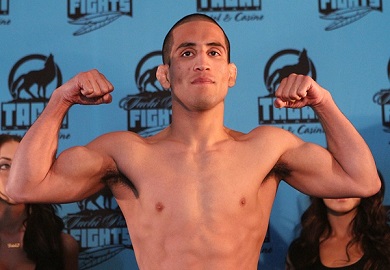 Earlier today news broke that Renan Barao was forced out of his bout against TJ Dillashaw tomorrow night at UFC 177. An inside source close to Barao told us that the former bantamweight champion passed out while cutting weight and for his own safety wouldn’t fight.

Stepping in for him however is a UFC newcomer, Joe Soto. Many people have been left scratching their heads as to why Soto was chosen to step up to fight Dillashaw in his UFC debut on such short notice, so we’ll break it down for you.

Soto signed with the UFC earlier this month, and was scheduled to fight MFC champion Anthony Birchak, who was also making his debut, at UFC 177. After Soto was moved to fight Dillashaw, Birchak was not given another opponent. Soto is an All American high school wrestler, and a 2x All American college wrestler, who even roomed with Jon Jones at college for a brief time. In 2006 at the age of 19, Soto made his professional MMA debut and won, Soto built on the win, and went on a 9-fight win streak that saw him win the Bellator season 1 featherweight tournament, and the Bellator featherweight championship. Soto lost the belt in 2010 to Joe Warren, before fighting at Tachi Palace 10, where he lost a title bout to Eddie Yagin. Those two losses remain the only on Soto’s record. Since losing to Eddie Yagin in 2011, Soto has gone on a 6-fight win streak that saw him claim the Tachi Palace championship in 2014.