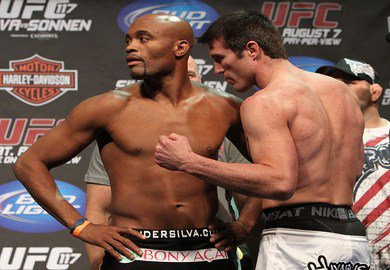 In a typical ‘trilogy match’ two fighters aim to settle a score where they are both 1-1 against each other.

In the world of Chael Sonnen, he still believes his first two matches with Anderson Silva were questionable and wants to prove he is the better fighter in a third match up.

‘If Anderson beats Chris Weidman, they’ll go into a rubber match, but I want to fight Anderson either way, regardless of the title. I don’t accept the outcome of either of those matches. We can fight; it doesn’t have to be for a belt. I don’t always chase titles around. I wanted to fight Jon Jones. He just happened to have the title. I want to fight Anderson Silva whether he’s got the belt or not. I’d like to fight him right now.’