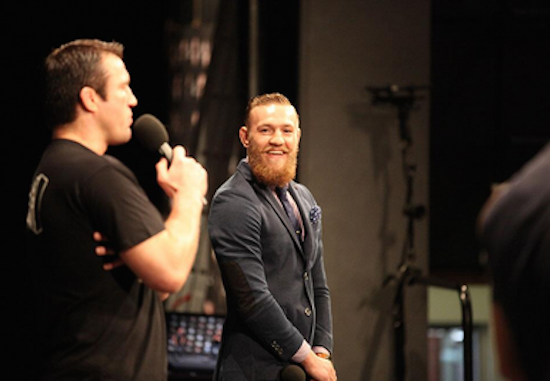 “I love everything that Conor McGregor is doing. He’s very entertaining, and I think he’s an outstanding fighter. He dealt with a tremendous amount of pressure when he fought in his hometown in a main event in Ireland. He sold that out, it was packed, and the whole thing was based around him.

“Diego Brandao is about as tough a costumer as you’re going to get, particularly in the first round, and Conor was able to finish him inside of five minutes.”

“When I watch people talk about Conor McGregor and say that he’s talking trash, they don’t understand what he’s doing and not listening to his interviews. Conor’s not talking trash. There’s some stuff getting thrown in there, sure. There are some guys he’s bringing down. He’s talking himself up. He’s not always insulting other guys, but a little of that happens. He’s out there entertaining. He has something to say.

“You’ll have these fighters that come out and say, ‘I’m not here to talk. I’m here to fight. I’m a fighter.’ Well that’s not really true when you’re sitting there at a press conference wearing a suit. You’re not there to fight; you are there to talk. That’s what a press conference is, genius. When you’re doing a post-fight interview with Joe Rogan, you’re not there to fight. You’re there to do the interview. That’s why he’s holding the microphone.

“Some of these guys just don’t understand it, and what Conor McGregor is more than he’s a great trash talker, he’s a great entertainer. The guy’s got a great gimmick, a unique look and a great accent. He’s patriotic to his country. He’s an Irishman.”

Is he right about his assessment?