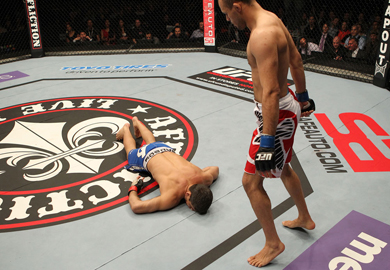 The injury bug has struck again. Michael Bisping, Thiago Alves, Yoshihiro Akiyama, Thiago Silva, Jose Aldo and George Roop were all expected to fight at the UFC 149 card in Calgary, Alberta but were all forced off the card due to injuries. Now, you can add Siyar Bahadurzada to that list.

UFC confirmed that Siyar was injured by releasing a tweet on the matter on Saturday afternoon, also confirming that Matt Riddle would replace him.

The bout was originally supposed to see Yoshihiro Akiyama face Thiago Alves in a welterweight bout. Unfortunately, Akiyama suffered an injury and was forced to pull out of the fight. It was announced that Siyar Bahadurzada would replace “Sexyama” against Thiago Alves, but Thiago Alves suffered an injury as well. Chris Clements stepped in for Alves, only to see Bahadurzada pull out due to an injury. While this spot on the card seems to be plagued by injuries, Matt Riddle has stepped in for Bahadurzada and we hope this is the final version of the alleged bout.

Chris Clements made his UFC debut at UFC 145 where he defeated Keith Wisniewski by way of split decision. With ten of his victories coming from knockouts and only one by decision, he is hoping to return to his hard-hitting ways against Matt Riddle at UFC 149.

Matt Riddle has been fighting for the UFC since the beginning of his mixed martial arts career. Originally an Ultimate Fighter Season 7 contestant, he successfully made his professional MMA debut against Dante Rivera at The Ultimate Fighter Season 7 Finale back in 2008. Since then, he has put on a series of entertaining bouts including a Fight of the Night against Lance Benoist. Riddle won his last fight against Henry Martinez at UFC 143.

UFC 149 will take place on July 21, 2012 at the Scotiabank Saddledome in Calgary, Alberta.