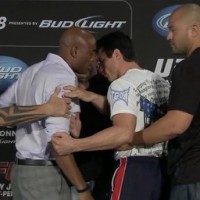 Recently, our middleweight champion, Anderson Silva, has been a little upset. In the latest conference call, the usually soft-spoken Silva unleashed a Portuguese tirade, promising several life-altering injuries to Chael and ensuring him that he will basically have to eat through a straw, as his teeth will be forced down his own throat.

These comments came as a shock to most, including Dana White who stated that in all his years of knowing Silva, he has never seen the champ this mad at an opponent. Of course, Silva has good reason to be upset as Chael has spent the last two years pestering Silva about their first bout at UFC 117 as he worked his way back up the ranks to earn another title shot.

Now, with the rematch just a few days away, Silva decides to play timid once more at the press conference until the staredown which resulted in Silva getting rather close to Sonnen and apparently whispering, “You’re gonna die”, in Chael’s ear.

Whether or not this affected Sonnen’s mindset is basically left up to your imagination as breaking down Chael’s psyche is similar to solving a puzzle of the clear blue sky. Its rather difficult.

Either way, I’d like to take into account Silva’s actions as of late as I am a strong detractor from forced hype and made-up rivalries. I’m not saying that this is a fake rivalry but instead wondering where Silva’s motives lie behind such brash comments and threats.

Hopefully, this anger is coming from a real place inside Anderson Silva as he is one of few people who can promise a brutal knockout, and then deliver that knockout without a problem. He often fights with his hands down and ego up but thus far, it seems to work just fine for him.

This new Silva though is a far scarier one than the jovial celebrity that usually shows up to press events. This is a fighter who is widely considered the best of all time and has made a career out of making top fighters look like amateurs (except for Chael as of today). Now he has unbelievable skill and a purpose driven motive filled with revenge?

Either way, Silva will come in to this fight motivated and prepared. It would just really take the wind out of the MMA community’s sails if we found out that Silva has making empty threats to hype a fight that does that job just by existing.

Chael will certainly have to put on the best performance of maybe any fighter if he truly plans on beating Silva in dominate fashion like he did for most of their first fight. However, if he walks away a loser on Saturday night, it means that Silva had his way with Chael, further cementing his legacy as the greatest fighter that we have ever seen. If Chael wins, that validates two years of trash talking and exposes the first fight for being a fluke, setting up the rubber match which would be able of stand alone on a card as fans would surely pay the PPV fee to watch a third bout, even if was the only fight on the card.