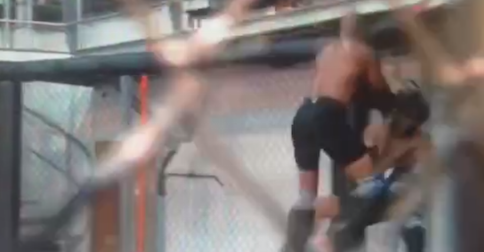 The recently released footage of Anderson Silva KO’ing his training partner (Replay) is being called into question by Anderson’s sparring partner, Douglas Moura, who says the clip was just clever editing.

“I wasn’t out, I was just dizzy. Right after that, I recovered, got back up and we continued training. Nothing happened. No big deal.”

“They didn’t do a good job with the editing. That’s not what happened. We’re fighting, it happens, but when (Silva) realized I was dizzy, he didn’t punch for real. He was just touching his hand on me, giving me time to recover. There was 2:30 minutes left in the round, and we continued training after that, but they didn’t show that on TV. It happened to me, but it also happened to him before. It’s completely normal”

“The way they edited, looked like he was trying to hurt me. That’s not what happened. During the other part of the training, they said Wendres ‘Godzilla’ (da Silva) gave up during his sparring session with Anderson, but that’s not true. The round simply ended and he was resting. Globo did a poor job with the editing.”

So there you have it. Anderson Silva is not trying to decapitate his sparring partners after all.

Watch “The Spider” return against Nick Diaz in the UFC 183 main event, January 31.