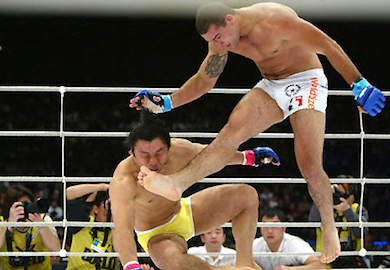 “For sure, the new rules hinder me. I think that the rule set from when I fought in Japan was safer than today’s rules. Elbows hurt a lot more than stomps. I had adapted to their rules. So when I came to the UFC, to get comfortable, it took some time. And, truthfully, my fight style relied greatly on stomps and soccer kicks. So to me, the greatest minus when coming to the UFC was the change in rules… I hope that one day, the UFC can legalize foot stomps and soccer kicks. It would be great. I miss it. During the PRIDE era, I have no recollection of anyone getting hurt badly from stomps or soccer kicks. Elbows, in truth, really do hurt an opponent.”

Former UFC light-heavyweight champion, Mauricio ‘Shogun’ Rua believes that the UFC is getting it wrong in regards to the range of strikes allowed inside the Octagon.

In truth, the unified rules of Mixed Martial Arts is governed and enforced by each governing body (Athletic Commission) but the UFC could introduce rule changes to the commission’s for consideration.

Will they though? It’s doubtful.