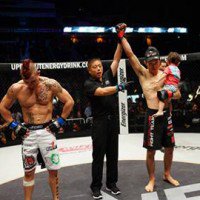 ONE Fighting Championship (ONE FC) Asia’s premier Mixed Martial Arts (MMA) organization impressed a sold-out Singapore Indoor Stadium with ONE FC: RISE OF KINGS. The largest MMA event held to date in Singapore proved to be a night of unforgettable action with a series of world class battles inside the famous ONE FC cage. The highly-anticipated debut of Japanese MMA superstar Shinya Aoki ended in success as the Japanese fighter defeated Arnaud “The Game” Lepont with a triangle choke submission in just 1:25 minutes of round 1.

After suffering a setback in his last fights, Aoki looked to have regained his winning ways as he entered the cage with confidence and proceeded to dominate the fight early by bringing the on-rushing Frenchman to the ground and making him fight where Aoki is most dangerous. Once on the ground, Aoki applied a triangle choke to finish Lepont in impressive fashion.

The packed Singapore Indoor Stadium also witnessed the crowning of Kotetsu Boku as the first ever ONE FC Lightweight World Champion and Soo Chul Kim as the first Bantamweight World Champion. Boku started throwing pin-point strikes at the far taller Moreira from the opening bell and it became quickly apparent that Zoro Moreira was not afraid to stand and trade punches with Boku. Both fighters displayed world class striking skills attempting various combinations throughout their bout. After a back and forth battle, Boku was able to land a series of right hands defeating his opponent at 1:02 minutes in round 3 by TKO.

Kim wasted no time against Leandro Issa in what turned out to be a very impressive night for the young Korean. Kim landed a hard right hand knocking his opponent to the canvas and finished him off with a series of strikes at just 15 seconds of round 2.