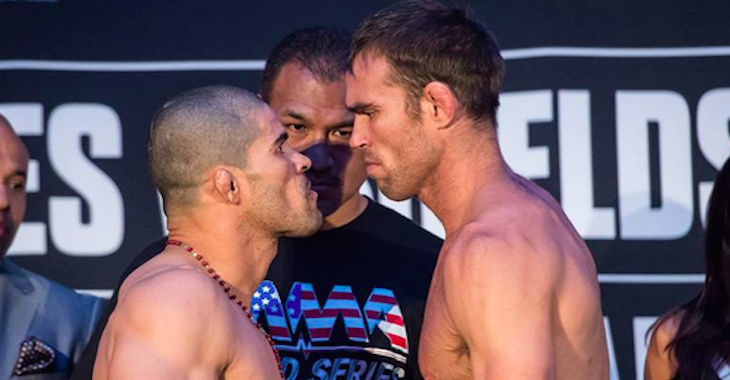 Jake Shields wants revenge in the worst kinds of ways for the stunts Rousimar Palhares pulled at “WSOF 22”.

The World Series of Fighting Welterweight Championship hung in the balance when Palhares and Shields met in the main event on Saturday night in Las Vegas. Palhares was able to submit Shields in the third round, but it wasn’t without controversy.

Shields was the victim of several eye pokes throughout the fight and even though he complained to Steve Mazzagatti about it, it fell upon deaf ears. “I’m not sure if it’s evident on TV, but this guy kept catching his thumb and digging it in my eyes and it’s 100 percent, absolutely deliberate… This guy did it over and over at least eight times,” Shields told Submission Radio. “I kept telling Mazzagatti who was completely ignoring it and he just allowed this guy to blatantly cheat.”

After Shields tapped out to Palhares’ kimura in the third round, Palhares chose not to let go of the hold until the referee stepped in, which is well within the rules. However, history repeated itself when Palahres held onto the submission long after the referee tried to pull him off. Shields threw a punch after the bell, but he doesn’t want to stop there.

“Yeah man, I want to fight the guy in the streets to be honest, ’cause I want to gouge his eyes back, I want to bite him, I want to kick him in the balls. I like actually wanna fight the guy. If I see him tonight I’m coming after him. Like I don’t like the guy. They’ve got rules and he’s not following the rules. I don’t know. I mean I’ll fight him again in a cage, but maybe I’ll stoop to his level if I have a shitty ref.”

Who do you think would win in a street fight between Shields and “Toquino”? Share your thoughts in the comment section below!