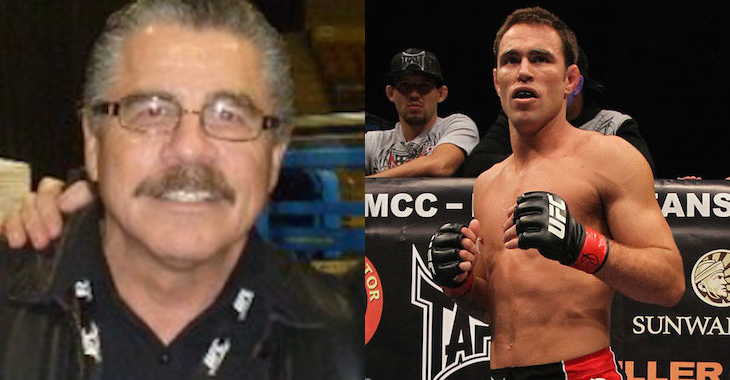 Dana White and the Ultimate Fighting Championship caught the mixed martial arts community off guard earlier this week with the firing of Jabob “Stitch” Duran.

“Stitch”, one of the best cutmen in the business, spoke out against UFC’s partnership with Reebok when he commented how it was going to negatively impact the income of people in his position. Just like the fighters, cut men and cut women of the UFC would no longer be able to wear sponsors other than Reebok into the octagon. However, unlike the fighters, they would not be compensated for their loss.

“Stitch” will be making the transition from the octagon to the decagon; Less than two days after his release from the UFC, it was announced that he would be working in August’s “WSOF 22” event headlined by Jake Shields and Rousimar Palhares.

Having an experienced cut man in your corner could be a fighter’s greatest advantage in a fight. “If you have a cut, you have to have someone that can fix it,” Shields told BJPENN.COM Radio. “And if you don’t get cut, you have the confidence that if you get a cut you’ll have someone that can fix it. These things are very important. You have blood leaking into your eyes, you have swelling on your face you need someone experienced like ‘Stitch’ to go in there. These are very serious matters.”

Just like “Stitch”, Shields spent a long time under the Zuffa banner before making the switch to WSOF. Now that he is on the outside looking in, Shields confessed that what is happening in the world of UFC is bizarre.

“I don’t want to talk too much bad about the UFC. My relationship wasn’t all bad with them, they did some good things for me,” Shields admitted. “I got some good bonuses from them. I also don’t want to be the guy that sounds like he’s sour [after getting] fired, but it is kind of crazy the stuff they’re doing right now. It’s hard to wrap your head around, like firing “Stitch” in particular. He’s the most loved cut man.”

Shields is hoping to welcome “Stitch” in his WSOF debut on August 1st at WSOF 22 by having him in his corner. “I love having “Stitch” in my corner, man. Hopefully he’ll be there at my fight.”