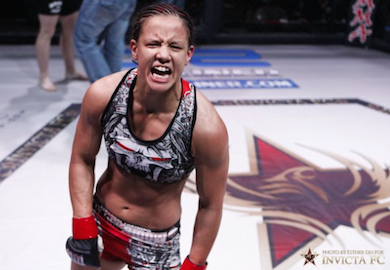 “Ronda knows that if they called me tonight to fight her tomorrow, I would do it. I tell her every day. Her and Jessamyn and myself, we all know we would fight each other if it came to it. We also know it would have to mean something. … Ronda and I have even practiced trash talking to each other, we have no problems. You know, Ronda’s the titleholder she knows it would be stupid of me to be in the sport and put in all this time just to say Ronda’s going to have the belt and I have no intentions of taking it.”

Ronda Rousey, Shayna Baszler and Jessamyn Duke have formed a team they call the three-headed horsewomen. Or maybe it’s the Trio-Of-Doom? I can’t remember.

At any rate, in a refreshing viewpoint, these girls apparently don’t mind fighting each other. An uncommon practice in Mixed Martial Arts.

Miss Baszler took to her recent interview with MMAFighting.com to express her mindset and the understanding amongst the female fighting team.