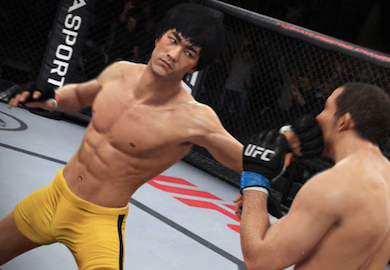 “I think that people who have negative comments [about Bruce Lee’s inclusion in EA Sports UFC] are misguided for the most part,” Shannon Lee told GameSpot this week. “Some people don’t realize that my father was more than just an actor, that he was truly a real martial artist. In a lot of ways more so than a lot of the fighters today because he lived and breathed martial arts. He often said everything he learned in his life he learned from the practice of martial arts. So I think there’s some misunderstanding in that regard.

“I think some of the purists out there [will say] ‘Oh, Bruce Lee never would have competed in real life…’ And my answer to that is this isn’t real life; this is fun, Bruce Lee liked to have fun. This is an opportunity to live out a fighting fantasy,” she added. “And I think we should all be grateful that the technology exists to have some fun in this way. And there are just some people who are haters [laughs]. And there’s not a whole lot I can do for those people than just to tell them that they might enjoy their lives a lot more if they stopped worrying about everybody else so much.”

Shannon Lee, the daughter of famed martial artist Bruce Lee, went on the defensive in a recent interview with Gamespot.com about her fathers inclusion in the new UFC EA video game.

Apparently some people have a problem with it. Do you?