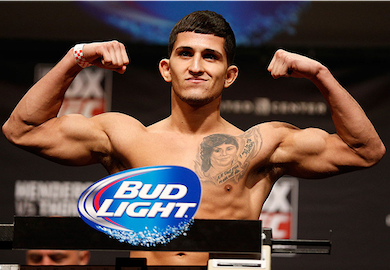 “That fight taught me a lot. No one likes to lose, but as Duke (Roufus) always says, ‘Losing is like your medicine. Don’t be bitter, get better.’ I learned a lot in that fight. It was my first time in deep waters and I froze up and made a mistake. Caceres capitalized on it and that made me learn that I need to be more cautious. My fight IQ is much better and I’m ready to show my improvements in this next fight.”

“I’m not a little boy anymore. My body is starting to look like a man and I’m starting to act and think like a man as well. This is my career and I’m fully invested in it in every way. My career is on the line in this fight and so is his. We are both coming off losses and we are going to see who wants it more. Meza is dangerous from everywhere. His stand-up is good and his ground game is legit. Obviously, he is going to try to take me down. He’s not going to want to stand up with me. I’m more of an accomplished striker than he is. He is going to try to take me down and do what Caceres did to me. He’s going to try to submit me because he watched my last fight and saw a flaw in my game. But I feel like I’ve improved a lot since then. I’m a lot better on the ground. My fight IQ is better and I feel a lot smarter going into this fight.”

In a recent interview with UFC.com’s Duane ‘Finster’ Finley, Sergio Pettis discussed his career, his growth as a man and fighter, and his upcoming bout on this weekend’s UFC on FOX Sports 1 Prelims.