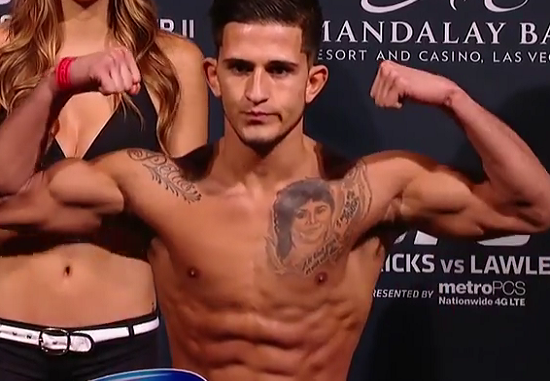 The win moved Sergio to 3-1 in the UFC, with all four of those fights taking place in the bantamweight division of 135-pounds.

But after the fight, Pettis suggested that he was seriously considering a return to the flyweight division (125 lbs):

“It was a good performance, but I think I might go down to 125 after this,” Pettis said. “These guys are a lot bigger than me (at bantamweight). I’ve been thinking about it for about a year, and I’m going to do a practice cut to see how it goes.”

Sergio, who is the younger brother of UFC lightweight champion Anthony Pettis, who also fought defended his title at the UFC 181 event, has found success at 125-pounds in the past.

Sergio won the RFA’s inaugural flyweight belt with a 51-second TKO of Dillard Pegg in June 2013.

“I want everyone in (the flyweight) division,” Pettis went on to say. “Whoever the UFC puts in front of me, I’m ready for.”

Do you think a move to flyweight is the right decision for Sergio? Sound off Penn Nation!