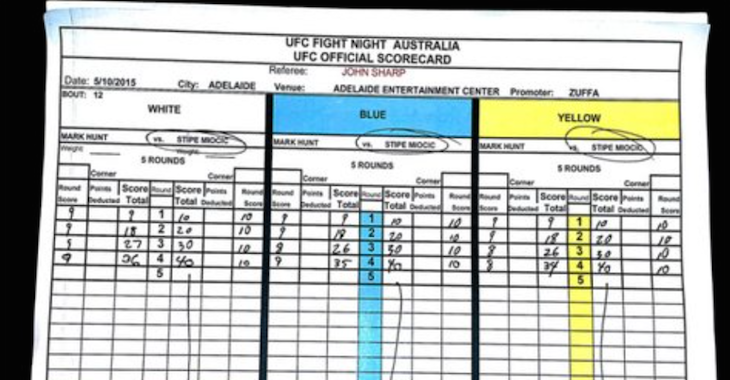 Many thought during the fourth and fifth rounds of last nights main event between Mark Hunt and Stipe Miocic, that the fight would probably go to a decision. Hunt continued to survive and the referee seemed to be giving him every chance and then some to keep fighting. Eventually Miocic did enough to get the ref to step in during the fifth round. But what if the fight did go all the way, what would the scores from the judges look like?

Well, now we know. The scorecard, pictured below shows some interesting decisions by the judges. One judge in particularly, Anthony Dimitriou, did not score any of the rounds 10-8. Even the most unseasoned fan should be able to watch that third round and say man Hunt did near to nothing while Miocic kept top position for most of the round. It just goes to show that even in fights that aren’t close and actually don’t go to decision, the judges still find ways to shock us all.

These scorecards from the Miocic vs. Hunt fight tell you a lot about what's wrong with judging in MMA: http://t.co/McgGavrcsV