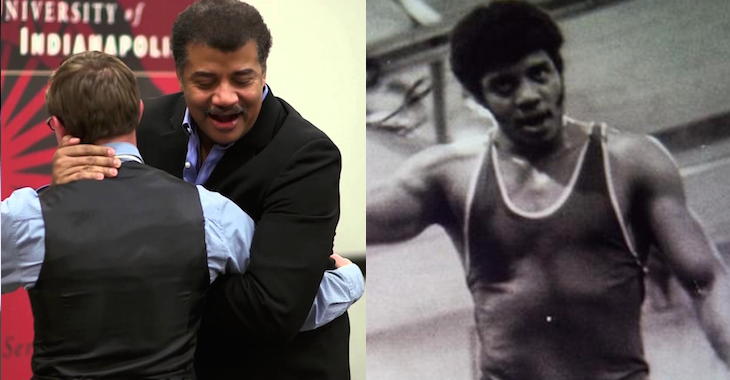 World renowned astrophysicist and cosmologist Neil DeGrasse Tyson  is one of the most well-known scientists in the world. He is the voice of “Cosmos” on FOX and wrote the planet-shattering “The Pluto Files: The Rise and Fall of America’s Favorite Planet”, but what most people don’t know is that he can probably kick your a**!

DeGrasse Tyson wrestled for Harvard while majoring in physics, a feat that very few people on this planet have the capability of doing. “A wrestling match is just the laws of physics,” said Tyson (via. FightState). “Where is the tipping point? Where is the center of mass? What are the support forces? And that’s how I thought about it.”

To the surprise of nobody, DeGrasse Tyson wanted to mix the worlds of physics and amateur wrestling in the form of a new move called the “double tidal lock”.

“I wanted to invent a new move called the double tidal lock. Because in space, two objects can orbit one another and one can use tidal forces to lock it so it always shows the same face. Earth has done that to the moon. The moon only shows the same face to Earth. We have tidally locked the moon. I wanted some kind of wrestling move where I tidally lock the person. I never came up with one, though.”

How long do you think you could last in a wrestling match with Tyson NOW? Share your thoughts in the comment section below!