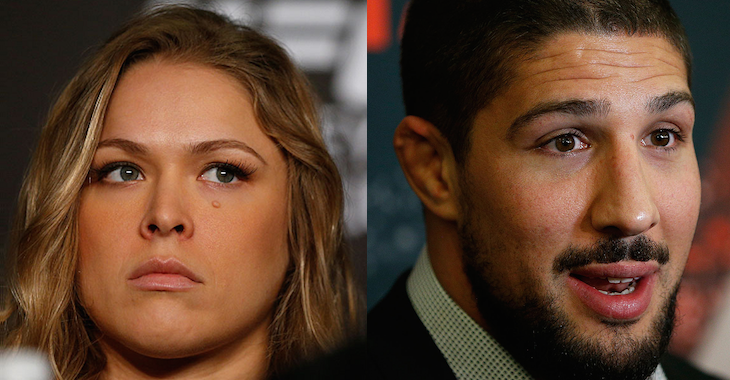 Things got personal on a recent episode of “The Joe Rogan Experience” when Brendan Schaub spoke out about his past relationship with ex-girlfriend Ronda Rousey!

Rousey was the talk of mainstream television last week after her thirty-four second victory over Bethe Correia at UFC 190. The argument could be made that Rousey is the biggest star the UFC has to offer, and Schaub’s friend Eddie Bravo joked that maybe he should try and get back with the UFC Women’s Bantamweight Champion. Schaub’s response was blunt and to the point:

Schaub: “Believe me, I did her a favor man. I’m not the guy for the job. I’m just not. I’m too much (of a man). She needs a guy who’s gonna take a backseat. That’s not me. She also needs a guy that’s gonna say ‘yes ma’am, yes ma’am’… She’s so successful, she’s surrounded by people that worship her and go ‘yes, yes, that’s a great idea’. But when I said ‘I don’t think that’s a good idea’, now I’m a hater. I have no financial gain from you. I don’t need anything from you, I’ve earned everything myself.”

Schaub was in no way trashing Rousey; He was mentioning that both of them are alphas and could no co-exist in a relationship. After Rogan stepped to wave the conversation off, Schaub wanted to make it clear that he was happy for Rousey’s success and holds no hard feelings towards her.