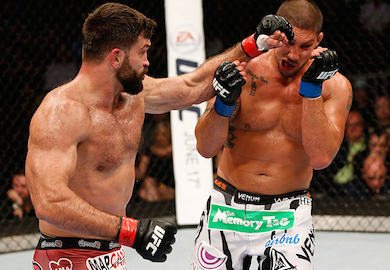 “For me, it’s just frustrating, but it’s onwards and upwards. I don’t know any different, but to get back to training and just…this is what I do, man. This is what I do. This is it. It went to the judges. I got screwed in a decision. I probably should’ve done more to make it clear, that’s on me.

“This is serious here, ” Schaub said, now crying and holding back tears. “I’m trying not to get emotional here. I’ve never got so much love in my life since this fight.”

“I put so much into it. In the second round, I was a little tired. I thought I lost the first, I knew I won the second and Rener [Gracie] goes, ‘Schaub, you have to win this third. Take him down and win this third.’ And I took him down, won that third. I swear on my life, what I thought about was all the support I get from this podcast. I swear to god.”

During a recent podcast, hosted by UFC heavyweight Brendan SChaub, Brendan cried to the audience about his last fight. (Replay HERE)