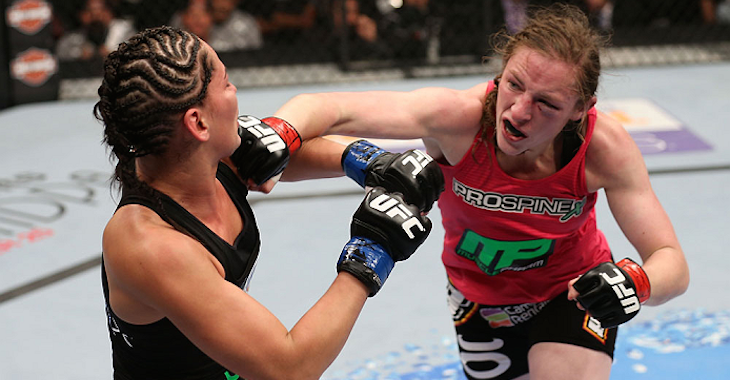 Earlier this month, UFC bantamweight Sarah Kaufman was mentally preparing herself to square off with a training partner in Holly Holm. Plans are ever-changing in the world of mixed martial arts, however, and Holm is now next in line to challenge Ronda Rousey for the UFC Women’s Bantamweight Championship.

Now out of a fight, Kaufman is looking to land an opponent as soon as possible.

“It was funny, when I first got the call to fight Holly I was like, ‘Really, Holly?’ We’re good friends, we’re teammates and I personally didn’t think it made a ton of sense with her being ready to go towards a title shot and me just coming off a loss,” Kaufman told MMA Junkie. “It was a fight that we didn’t really know what to think about.”

Lucky for Kaufman and even luckier for Holm, UFC decided to scrap the potential bout in favor of pitting Holm against Ronda Rousey, now set for UFC 193 in Australia.

Kaufman is coming off a disappointing loss to Alexis Davis at UFC 186 earlier this year. Even though Kaufman won the opening round and dominated the striking game, Davis was able to take the fight to the ground where she ultimately forced Kaufman to verbally submit in an armbar.

Now, Kaufman is looking to make her return to the octagon as impactful as possible with an opponent in the top ten.

Who do you think Kaufman should face in her return fight? Share your thoughts in the comment section below!