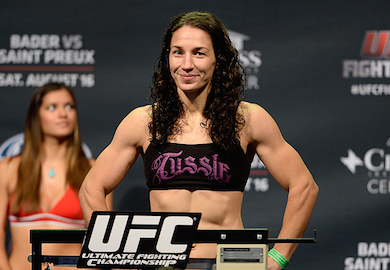 UFC women’s bantamweight Sara McMann might not have been the right person for a school bully to pick on when she was a kid.

The Olympic silver medalist spoke to MMAJunkie about the last time a school bully picked on her.

One of McMann’s friends even warned the bully that McMann was the wrong girl to make fun of, however she didn’t heed the warning.

“That was the end of the school year…The next school year, I came back and broke her nose.”

“She was a girl who spread these rumors just to destroy other girls’ reputations. There was one girl who, her family was rich, but she wasn’t quite as cool. This other girl made up these mean nicknames for her and started these terrible rumors that weren’t true, and she just thought she’d get away with it because she was the popular girl. I was a poor girl with nothing to lose. I didn’t care if I got transferred. I just felt like, listen, you’re probably going to get your way with a lot of things in life, but you don’t get to get away with this.”