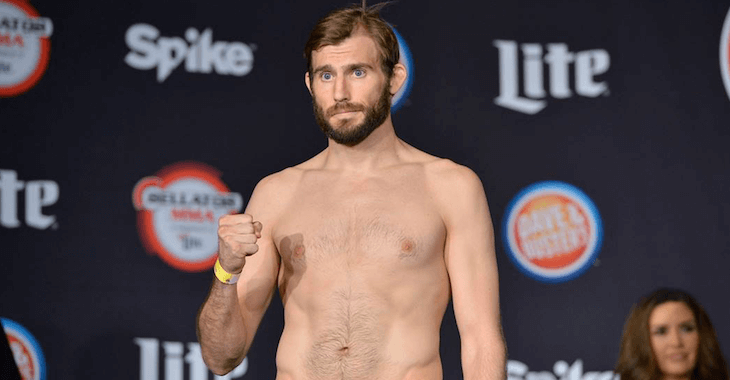 Ryan Couture may have simply been known as “the son of UFC Hall of Famer Randy Couture” when he made his professional mixed martial arts debut in 2010, but the lightweight is starting to step out of his father’s shadow and create a unique following of his own.

While his father competed mainly for the UFC, Ryan has become a bit of a journeyman in MMA, learning lessons while fighting for both Strikeforce and UFC. Couture now calls Bellator his home and will be fighting for the promotion this Friday at “Bellator 143” when he steps into the cage to square off with Nick Gonzalez.

While Gonzalez is not a household name in the world of MMA, Couture is by no means overlooking his upcoming opponent. “He’s very durable, he shows up in shape and he hits hard. So, I’ve got to fight smart and put him away,” Couture told BJPENN.COM. “I don’t want to end up testing chins or testing cardio with him. I’ve got to outsmart him and work my strengths and fight where I have an advantage.”

An exciting win over Gonzalez would give Couture his fifth win in a row and the argument could be made for the lightweight to move into the top-tier of his division joining the likes of Michael Chandler and Patricky Freire. “I haven’t knocked off any of the more established main guys that are always in the mix,” Couture admitted. “So if I can get another dominant performance here [at Bellator 143 on Friday], that’ll make a good enough case to put me in a future fight with one of the contenders.”

Couture has proven in the past that if he is given the opportunity to take the ball and run with it, he will succeed with flying colors. Strikeforce gave him a similar chance in 2012 when he graduated from their “Challengers” series to fight on the biggest card of the year with Ronda Rousey.

“That was huge for me,” Couture commented. “I was really excited to take the step up in competition. Taking on Conor [Heun] who I had seen over the years and always respected and who’s really one of the few people you can legitimately apply that term “warrior” to… that guy would have fought to the death anytime out. To get to step up on such a big stage against a guy that I respected like him was huge for me.”

Couture impressed in his final Strikeforce fights before making his way to the octagon where struggled to find success. After consecutive losses to Ross Pearson and Al Iaquinta, UFC chose not to re-sign Couture. “There’s no room for error there,” Couture said about his time in the UFC. “I feel like I got a fair shake and I didn’t make the most out of that opportunity.”

Couture stayed on his feet and rebounded quickly by signing with Battleground MMA before getting picked up by Bellator. Now, Couture is channeling the momentum of his four fight win-streak into his fight with Gonzalez this Friday and he is nothing short of confident about the bout.

“I don’t think there’s any secret how I like to fight,” he said. “I’m gonna move forward, put the pressure on, punch him up, drag him to the mat and get a hold of his neck. I hope he’s ready to go and ready to grind.”