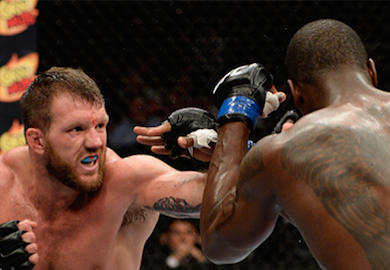 In a main event that was criticized by many, including 205 pound kingpin Jon Jones, Ryan Bader defeated Ovince Saint Preux to a lackluster decision.

“[The broken hand] does mess with you in camp,” said Bader to José Youngs for ArizonaSports.com. “I couldn’t really grapple for four weeks so it did mess with me a little bit. But I put in the work, and I wasn’t going to pull out of a main event slot. In the fight it felt fine, I could throw it and it held up. The only issue was being in camp and not being able to do what I wanted to do.”

“I hadn’t fought a southpaw since Nogueira, which was four or five years ago. Not only that but he’s very long, one of the longer guys out there. So for me, I knew I had to definitely improvise a little bit. I felt flat, so I had to rely a little more on my takedowns.”

His manager confirmed the injury with BleacherReport:

“Ryan did injure his hand in a sparring session several weeks out from the fight,” said Maritn. “He wanted to push through and fight, so he decided to use a removable cast on his hand, which pretty much eliminated his ability to use it in the final weeks of his camp. He was still able to train and keep his conditioning up but wasn’t able to spar in the final few weeks of his camp. That said, he still went out there, fought a great fight and picked up a big win.

“The great thing is that this injury will not require surgery and he’s going to take some time off to allow some other nagging injuries to heal up. His wife is going to have their third child any day now, and he obviously needs some time to allow his body to heal and enjoy his personal life before he jumps back into the Octagon.”