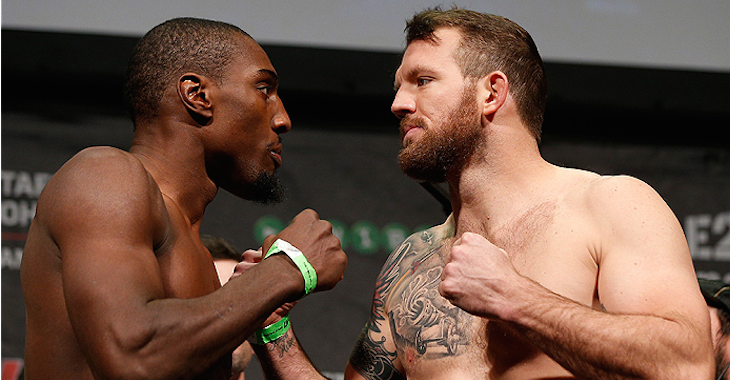 After Daniel Cormier disposed of Anthony “Rumble” Johnson at UFC 187 for the vacated UFC Light Heavyweight Championship, Ryan Bader confronted the new champion at the post fight press conference. The confrontation caught Cormier off guard and got under his skin and it seemed like his first title defense was set: Cormier vs. Bader.

Not so fast, my friend.

Alexander Gustafsson may have been coming fresh off a loss against Anthony Johnson, but he somehow got the first shot at Cormier’s newly won gold. Bader was irate at the company’s decision and actually told MMA Junkie that “other options” came to mind after getting snubbed. Realistically, if he walks out of his UFC 192 bout with a victory over former champion Rashad Evans, he is next in line.

If he gets overlooked again, however, he could be knocking on Bellator’s door.

“You always have to look out for yourself first and foremost, especially in this sport. We’re all independent contractors. We have our team. I have a kind of unique thing in Arizona where we own the gym, we have a great team together. But you’re going out there, you’re providing for your family by yourself. You have people around you, but you have to look out for number one. It all runs through your mind. You see a lot more people fighting out their contracts now.

“I still enjoy fighting the elite of the elite in the top organization. I want to be a UFC fighter. At times like that, where you get passed over, you definitely think of other options. Will I ever get there? I’m doing the right things, I’m going out there and winning. Are they going to hold up their end of the bargain? For me, that’s gone through my mind. But I’ve got a big fight. If we weren’t fighting Cormier and we didn’t get that Anthony Johnson fight like we were trying and Cormier fight got pulled. Gustafsson got it coming off a knockout loss to the guy that just fought for the title. But I got the Rashad fight. He’s a top five guy, he’s a former champion. I just told myself I was going to let everything go and go out there and beat this guy and make a statement.

UFC 192 is set to take place in Houston, Texas on October 3rd. Who do you have winning the Bader/Evans bout, and would the winner deserve a shot at the gold? Share your thoughts in the comment section below!