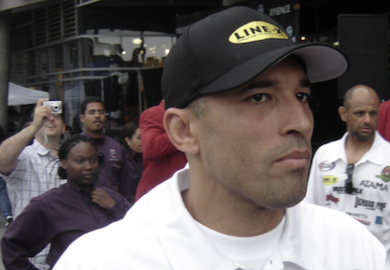 Royce Gracie, UFC 1 champion and Brazilian jujitsu legend, recently gave his thoughts on the UFC’s popularity and how it has grown since its creation. Gracie (14-2-3 MMA, 11-1-1 UFC) spoke Wednesday, during UFC 167’s media workouts.

“It became mainstream. I know because little kids now, when I travel – I’m on the road about eight months of the year – and when little kids come up to you, you’re talking about 8, 10 year olds, saying, ‘I want to be in the UFC. Can you hook me up?’ You know the UFC made it.”

Gracie went on to discuss some aspects of the sport that have changed, and some he would like to see brought back.

“The difference now is there’s a lot of strategy. The guys have learned different styles of martial arts.”

He knows a thing or two about the UFC’s “NO RULES!” past, having competed in the company’s first 5 events. Gracie beat guys that were probably triple his size, and he did so without gloves, rounds, and essentially no rules (just no eye-gouging or biting). He wouldn’t mind seeing the fighters of today put in that same situation.

“No gloves, no time limit, no weight division – that would be very interesting,” he added, “The game changes a lot. The strategy changes a lot. It’s a different strategy.”

We all know that this will never happen. The UFC and the sport of MMA are huge and still growing and that’s mostly due to the fact that it is more mainstream now. It’s not a coincidence that once rules and weight divisions were added to the UFC it began to explode in popularity and gain legitimacy. Gracie’s idea is defiantly something to daydream about, like how would Demetrious Johnson vs Junior Dos Santos play out? But beyond that even Gracie understands that the sport has become what it is because those backyard brawling days are over and now UFC is among the other major sports leagues,