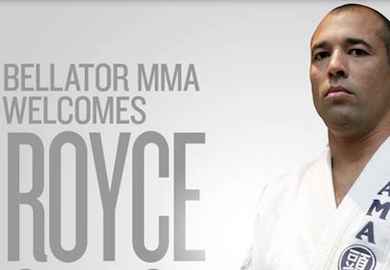 Known simply as the pioneer of mixed martial arts, Royce Gracie is widely considered the most influential and important figure the sport has seen. Engaging in some of the most memorable fights in MMA history during his time with the UFC and PRIDE Fighting Championships, Gracie has now joined Bellator as an official brand ambassador for the Viacom-owned promotion.

“I have known Scott for a long time and have always respected him as not only a promoter but as a martial artist who has always treated fighters with respect and truly understands their value,” Gracie said. “Bellator and Viacom want to give fans exciting fights and enable fighters to continue to grow and most importantly provide for their family, and it’s something I want to be a part of. UFC has done a great job over the past twenty years in building this sport and taking it globally and I’m glad to have been part of that, but Bellator is a growing organization I am honored to be a part of, and with the dedicated and talented people already associated with the company, we can further the growth of mixed marital arts as a sport worldwide.”

Gracie will immediately be involved with Bellator including promotion for Bellator 131, which is headlined by a light heavyweight showdown between Tito Ortiz and Stephan Bonnar, along with a Lightweight Title fight between Michael Chandler and Will Brooks on November 15. Moving forward Gracie will host seminars, be involved in autograph and promotional appearances, as well as aiding in the International expansion of Bellator around the world. Bellator and Gracie will also be involved in a co-branded merchandise line that will debut in 2015.

“To call Royce a legend would be an absolute understatement,” Bellator President Scott Coker said. “Royce and the Gracie family are directly responsible for making this sport what it is today and we are incredibly fortunate to have him be a part of the Bellator family. Royce will serve in many different capacities for Bellator and I look forward to our fighters, staff and most importantly, our fans, in having the chance to interact with one of the most iconic figures in sports.”