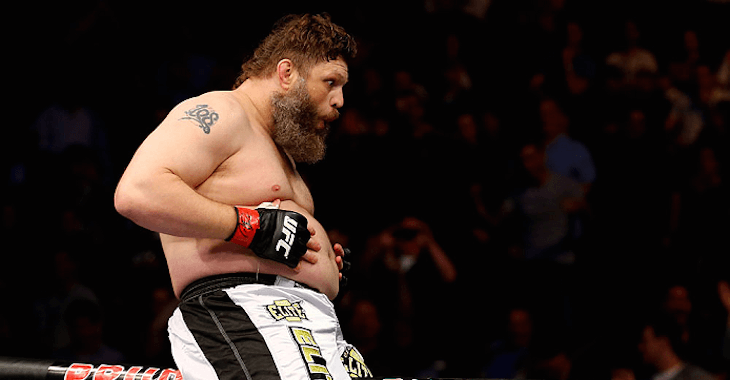 UFC heavyweight Roy Nelson isn’t all that impressed with the new drug testing policy and in fact doesn’t think it’s going to change much of anything.

‘Big Country’ recently talked to FOX Sports and said that he thinks there’s very little difference, saying that fighters can still get away with using drugs just like they did before.

It’s shocking coming from someone like Nelson who has been somewhat outspoken about his desire for stricter drug testing in the sport. Well now, for some reason, Nelson doesn’t feel the need to push for a cleaner sport, but says the new policy in place won’t change anything.

“On the testing thing with PEDs, I think we are still in the same spot as we were before. We’re talking about it more but I think we’re in the same boat as we were before. I think it’s like the war on drugs, but they’re still being flown in. For me, it doesn’t matter. I’m not in the drug-testing business and I’m not an employee so I’m not worried about what guys are doing anyways. You can do cocaine and still be okay. Jon Jones did that before. You could be like ‘I have an exemption and a doctor’s note that says it’s okay’ and as long as you put that out there it’s okay. As long as you put it out there like ‘Hey, I’m taking this because the doc says it’s cool,’ you can still take it and pass the USADA test, so it’s still cool.”

“You just kind of go with the flow. Drugs are bad. That’s what I’m going with now. That’s what they say to say now, so that’s what I’m going with. Before it was ‘drugs, just don’t talk about them’ so I’m just going with the flow. I’ve gone in fights where I know the guy is on stuff so it doesn’t really matter anyways. It’s just one of those things. As long as the fans know what kind of a person this is, that’s all that matters.”