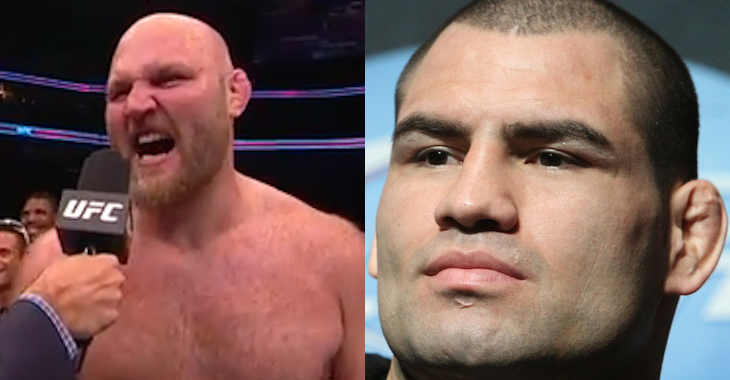 Ben Rothwell is basking in the glory of his win from Saturday night when he dominated “Meathead” Matt Mitrione at UFC Fight Night 68. Rothwell cut an interview after the fight which put the entire heavyweight division on blast, and he vowed he would become the UFC Heavyweight Champion.

Rothwell has his sights set on Cain Velasquez’s championship, and he was tickled when his Javier Mendes stated that Junior dos Santos was the champion’s only threat.

“Javier Mendez says JDS is the only threat to Cain,” Rothwell told MMA Hour. “That’s a joke in itself. I’m not pissed off. I laugh. Its funny. It’s whatever. That’s wishful thinking. He’s hoping that things don’t change. Is the guy tough?”

Rothwell then took the interview into an interesting direction when he started to point fingers and question whether or not Velasquez would perform the same once drug testing began on July 1st.

“Let’s see what happens after July 1, when the advance testing starts kicking in,” Rothwell said. “Let’s see if [Velasquez is] still fighting the same way he has. I doubt it. I’m not implying anything, what I’m just saying, I don’t believe every division is going to look the same after July 1st. If anyone takes offense to that, maybe they ought to look at themselves and look at their problems.”

“Big Ben’s” eyes opened when Anderson Silva failed his drug test after UFC 183. While the former UFC Middleweight Champion is still awaiting his hearing with the commission, his legacy has been questioned by many.

“When Anderson Silva tested positive, a seed inside of me opened up. Something changed dramatically in my life. I was so upset and so enraged at the same time. I was like, I knew it, I knew it all along. And it just came, it’s true. It’s sad to see these things about these heroes we looked up to, these heroes we believed so much in, it’s just, it’s a fact these guys are doing anything they have to win, and they’re not real.”

Rothwell was quick to dismiss any allegations of performance enhancing drug use for himself even though he was suspended for elevated testosterone levels after UFC 164. He mentioned, “People say ‘Ben Rothwell, you did this and that,’ whatever. 2012, mine was a prescription, the UFC knew about it, and it was what it was. I don’t regret anything, I had to go through that. Now that I went through that I get scrutinized 10 times as much as everyone else. I know where I’m at.”

Do you think Rothwell has a point? Will Velasquez perform differently, or is Rothwell simply trying to make some noise again?