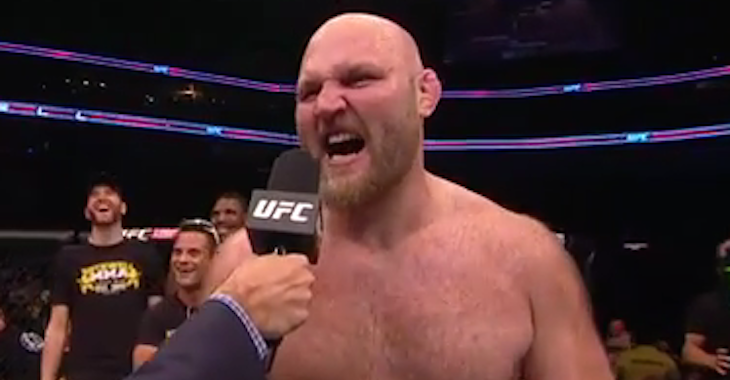 Ben Rothwell certainly made his presence known Saturday evening at UFC Fight Night 68 in New Orleans. For the few that weren’t impressed by his finish, they must have been caught off guard by his evil and bizarre post-fight speech.

During the post fight press conference, Rothwell explained that he simply wanted to make some noise.

“I guess you got to make some noise, right? I got to get people to pay attention. When you say inspiration, I think a lot of it comes from the writers right now in MMA. Constantly i feel like I’m getting overlooked and I’m not getting any respect. Again I was the underdog tonight on the writers column; everybody picked Mitrione,” Rothwell said.

He continued, “I’m getting used to it, I like it, keep making me the underdog. Keep doing it, I like putting a loss on your picks there. I guess I’ll keep being the underdog in my next fights, and that’s fine with me because as you can see, it doesn’t make a difference.”

What did you think of his post-fight speech? Will it propel him up the ranks? Share your thoughts in the comment section below!