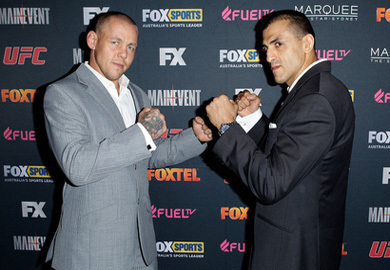 Ross Pearson offered up the inside scoop on the off-camera fight between George Sotiropoulos and “Real Deal’s” assistant boxing coach, Erin Beach, which took place during the filming of The Ultimate Fighter: ‘Smashes.’

It was a fight that started when George supposedly took a “cheap shot” at Erin, which ultimately ended up bad for the Australian fighter. Here is what Pearson had to say about the incident during his recent appearance on The MMA Hour:

“So, we were there filming and it was all cool. And, I think it was the second or third fight and Australia went one, we went one. Me and my coaches were going back to the guest hotel where we were staying. And obviously, because we won the fight, we were cheering and jumping around. Just acting silly, really. And Team Australia’s coaches, George and his team, must have found that offensive, you know? So, they are all outside our hotel and we are all in our UFC TUF: Smashes gear and George confronted us, tried to start a street fight, like a group fight. It was crazy. So I separated them from the street. And from that, it started like a little bit of a twitter back-and-forth fight between me and George. Just telling him to get ready to fight in December blah, blah, blah. And then my assistant boxing coach, Erin Beach, he happened to say a few things on Twitter and George didn’t like it. A few days down the road, filming on the set, but off camera, George cheap shotted Erin. Yeah, cheap shotted him from behind. Like punched him straight in the face from behind. Crazy things happened. Obviously George didn’t put Erin down on the floor. He backed Erin up a little bit and tried to go in to finish him off and Erin knocked George out. It turned into a street fight. Obviously, UFC wasn’t happy with what happened but it was just ridiculous, really. George didn’t even fight him like a man, cheap shotted him when he wasn’t looking. When I said all the things that I said about the show I wasn’t lying. I did lose all respect for George, I still don’t respect him now. He’s done some ridiculous things. When I said that’s the real George Sotiropoulos, that’s what I was talking about. He was crazy man. The guy has problems, he’s got issues. Those were the things I was saying but I couldn’t release what happened. And I was telling the truth, I didn’t lie.”

Erin Beach is a current MMA fighter himself, sporting a record of 3-1 and was last seen defeating Roscoe Jackson at Bellator 55 back in 2011.

The British brawler also declared he used the incident as motivation for training and says knocking George out in the third and final round in “The Land Down Under” was the “icing on the cake” after their bitter rivalry during the filming of the show.