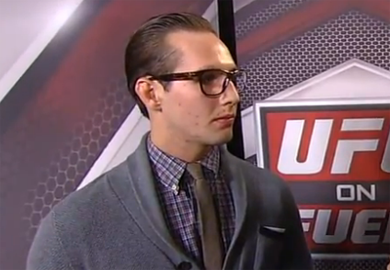 The biggest fight in Rory MacDonald’s young career is set to go down December 8 at UFC on FOX 5 in Seattle, when he takes on UFC legend BJ Penn.

The fight with “The Prodigy” was originally slated to take place back in September at UFC 152 in Toronto. However, MacDonald suffered a deep cut to his forehead during training which resulted in the match being postponed until the December event.

Having not set foot inside the octagon since April seems to be messing with Rory’s head, as the 23 year-old Canadian says that he doesn’t need time to prepare for a fight like “everyone else” (via MMA Fighting):

“I like to fight and I want to make it a point next year to take fights on shorter notice,” he said. “It just works better for me and my mind set. I feel like lately I’ve been trying to do what everyone else does, and I’m not everybody else. Some people need eight weeks to get ready for a fight and I really don’t think I do because of the way I look at my skills. I just need to be healthy. As long as I’m healthy I can fight at the drop of a pin. If you tell me, ‘Rory, gofight that guy,’ I’ll go do it. I don’t need that time. I just need to be healthy.”

The bout with Penn will be the first fight in UFC history to have VADA (Volunteer Anti-Doping Agency) testing, as both fighters have agreed to go through the expanded drug testing. MacDonald talked about the VADA testing and why he doesn’t care what his opponent is on:

“I would fight anybody who’s on testosterone or whatever,” he said. “It does not bother me at all.”

“Everybody’s looking for an edge in athletics, and if people would just realize the biggest edge is up here,” he says, pointing to his head, “they could show their best side. That’s all I need. Yeah protein helps, but at the end of the day if you’re a fighter and ready to fight at this very second, it’s all up here. And if you feel you need testosterone to make you better, you’re not going to be as good. I really don’t think in such a high skill level sport, that strength is going to be the biggest issue. if you rely on strength in the sport, you’re going to be weeded out. There’s going to be someone that’s more technical than you or stronger than you. So in this sport I really feel it’s better to have more skills than strength. If you can have both, great. But you don’t need to do that stuff. It’s unhealthy, it’s stupid.”

UFC on FOX 5 is set to take place on December 8 at the Key Arena in Seattle, Washington. The event is headlined by a lightweight championship bout between champ Benson Henderson and #1 contender Nate Diaz.