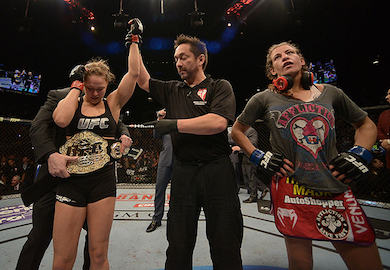 Under the expert guidance of her world champion mother, Ronda Rousey has climbed to the pinnacle of Martial Arts.

As an Olympic Bronze medalist and the first female UFC champion, Ronda Rousey is a role model for all female fighters looking to reach greatness.

Her mother recently took to her personal blog to breakdown Ronda’s UFC 168 fight against Miesha Tate.

My husband asked me what I thought about Ronda’s fight and I’ll tell you the same thing that I told him.

It was clear to me that she took 0 chances in the fight. In her earlier fights, she had taken more risks and even though that resulted in her winning her fights very quickly, it also meant that a couple of times she got in positions that were a disadvantage and that she had to fight out her way out of.

In this fight, she only went for the arm bar when she could do it without taking any chances of giving her opponent an advantage. It’s not the way I would have done it, which is interesting because when we did judo, if you compared Ronda’s matches to mine, she was generally more of a risk taker.

Be that as it may, I am very hesitant to criticize the decisions elite athletes make in a match, especially when they win. You can make suggestions as a coach, but the fact is, it’s not you out there fighting and the person who is fighting has to make snap decisions based on numerous variables – the way they feel balanced, the other person’s balance, direction of movement, etc.

I told Ronda what I have told her a hundred times, “if the referee’s hand goes to the side you are on (i.e., you won), then you did it right.”

For all of the people talking about Ronda’s manners, behavior, etc. etc. I will tell you two things:

As I told the nice man from ESPN, Ronda is 26 years old and in a very public arena. If you think of all of the things you see from entertainers and professional athletes – DUI, steroid use, wild parties, drug rehab, multiple extramarital affairs and on and on. Or just think of the average 26-year-old. If you’re a parent and the WORST thing anyone can say about your 26-year-old child is that he or she says “Fuck” and didn’t shake someone’s hand, you ought to go to mass, light candles, get down on your knees and say a prayer of thanks.

Recently someone who had lied to me and about me came up to me at an event and tried to shake my hand. I told him, “You’ve got to be kidding me!’ If you lie about someone behind their back, disrespect them and their friends, I completely understand if that person doesn’t want to shake hands with you. Pretending that “It’s all good now” might make the liar feel better but I don’t see why you should do it. If that’s what you think you should do, then I won’t tell you how to run your life, but I personally have seen a lot of organizations that are completely ineffective because everyone tries to get along, and people who are dishonest or incompetent stick around because no one wants to get in their face and tell them to get the hell out.