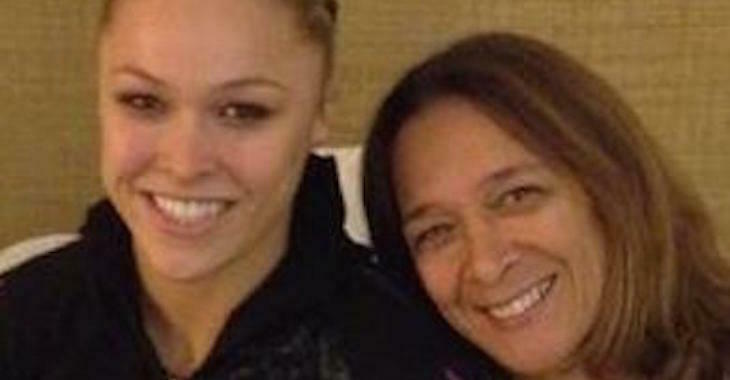 Looks like UFC champion Ronda Rousey’s mom, AnnMaria De Mars, isn’t a fan of some of her daughters ‘people’.

The champs mother recently took to her blog and wrote a lengthy post about a few concerns she has. He talked about how she sees a lot of people who want to be around Rousey but not people who are willing to call her out for anything she does. Basically she sees her daughter surrounded by a lot of ‘yes’ man (women), who only want to tell Ronda how good she is and are too afraid to go against her on anything.

She doesn’t mention names, but does detail one experience where a male friend of Rousey’s came to her with some concerns about her daughter. When AnnMaria tried to tell him to go say these things to Ronda herself, he asked if she would come with him. Below are just a few clips from the post, make sure to check out the whole thing HERE:

First of all, if you came here thinking this was going to be a post trashing Ronda you can stop reading now because I’m her mom so of course I think Ronda Jean is a whole cupcake of amazing, frosted with awesome sauce and sprinkles of sweetness on top.

However, I think some of the people she hangs out with are douche bags.

The difference if you are rich and famous is that people don’t call you on your s—.

Sometimes, people will say to me privately that they disagree with some decision Ronda has made. They might go on at length and in great detail. When I suggest that they tell Ronda that to her face, they make a lot of excuses. One person even suggested that I go with him when he talked to her. I refused, even though I agreed with his opinions. He’s a grown man but he’s afraid that if he disagrees with her then she won’t let him hang around any more and he won’t get to be a big shot.