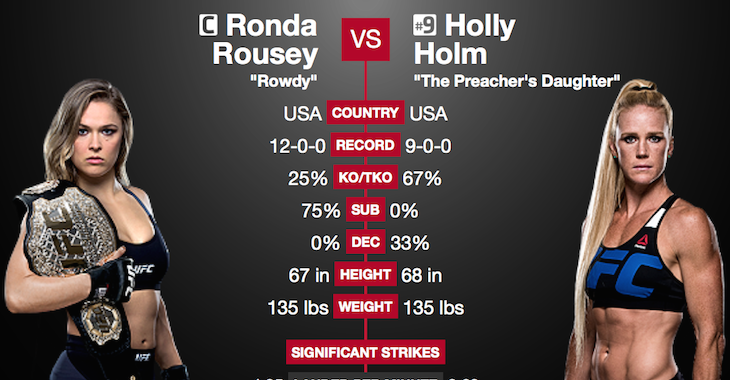 The UFC decided to announce bantamweight champion Ronda Rousey’s next opponent during ‘Good Morning America’ yesterday, while everybody was probably still sleeping. So, when everyone woke up they were greeted with a major shock, as everyone expected Miesha Tate would be the next in line to fight Rousey (again).

It’s been well established that the UFC had other plans and didn’t think anyone would want to see a third fight between the rivals. So, we’ve got Ronda Rousey vs. Holly Holm set for UFC 195, in Las Vegas on Jan. 2.

Guess what? With this fight we will be getting another undefeated vs. undefeated storyline. Both Rousey and Holm have yet to taste defeat inside the cage and will look to keep things that way after UFC 195.

So how does Holm stack up to the champ? Take a look at the side-by-side stat breakdown!