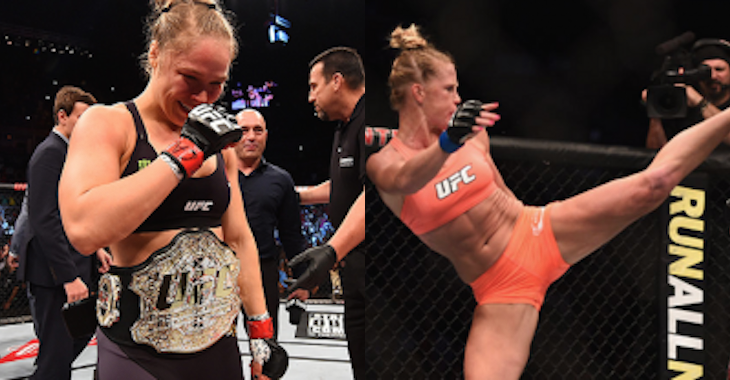 In a strange turn of events, UFC bantamweight champion Ronda Rousey will now be facing Holly Holm, not Miesha Tate, at UFC 195.

The fight was announced on Friday morning’s ‘Good Morning America,’ in which Rousey was a guest. On the broadcast Rousey revealed that she would indeed be taking on undefeated Holm, who is a former pro boxer and currently 2-0 in the UFC.

Everyone expected that Miesha Tate would be fighting Rousey for the third time, probably because it was all but signed and made official. Even president Dana White said that she was the number one contender. Although, Tate has been saying in interviews that her team never received an official offer for the fight, or even a phone call.

What do you guys think of the match-up, is Holm ready for a title fight?

Chalk this up to a few things. A-does it really matter who they put against Rousey and B-the overall response to Rousey vs. Tate 3 wasn’t all that hot. The UFC probably more potential with selling another undefeated vs. undefeated storyline.

Rousey is of course coming off of that 34 second KO over Bethe Correia at UFC 190 and Holm is coming off of a decision win over Marion Reneau at UFC Fight Night: Mir vs. Duffee.

UFC 195 will go down in the MGM Grand Garden Arena in Las Vegas on Jan. 2.