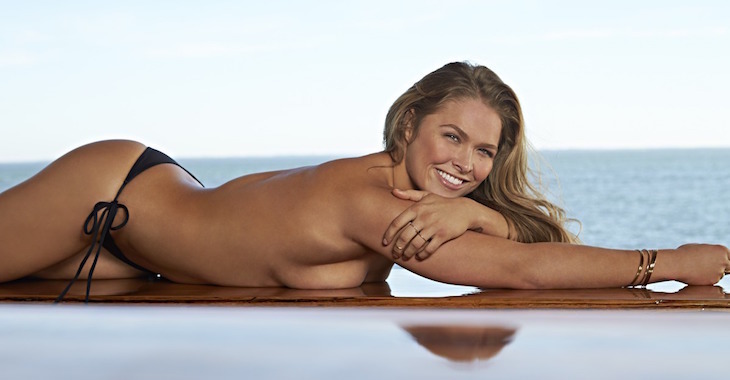 So serious in fact, that while the rest of the world dines on every delectable dish imaginable, the UFC champ is eating berries off her sugar-laced deserts, and taking small samples of gourmet candy, just to try to get a quick fix.

In a new interview with ESPN, the world’s most famous fighting female explained her meal plan in great detail.

“I try to keep healthy-ish, but I’m so on point when I’m in camp that having a vegetable wrap would actually only be healthy-ish because of the wrap on it.”

“Like last night, I got the fried calamari and I took all the bread off before dipping it, and that was my treat. And I had one little rip of the cotton candy because I thought maybe gourmet cotton candy would be different. It wasn’t. And I ate all the raspberries off the desserts. Everyone else had dessert. I ate the raspberries. And I wouldn’t even do that during camp. Let me show you what my training diet looks like. [Takes out her phone, pulls up a sample menu.] Here we go. 8 a.m.: Two teaspoons oat bran, two teaspoons chia seeds, two teaspoons hemp seeds; 10 a.m.: Train; 11:45: Post-exercise smoothie; 12 p.m.: Farmer’s scramble: one whole egg, plus two egg whites, two sides of turkey bacon; 4 p.m.: Snack: one apple, one-fourth cup raw almonds, one-fourth cup raw cashews; 6 p.m.: Train. Post-exercise smoothie, da, da, da. Before bed: Chamomile tea. Everything’s got an hour, an amount, everything.