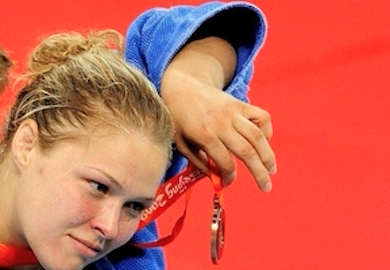 So, an Olympic Medalist walks into a bar…

“I lost my medal like seven times. I really did. After the Olympics I was like ‘I never get to drink,’ so I was like, ‘maybe I’ll get free drinks if I go out with my medal.’ There were so many times I woke up the next morning and thought ‘where’s my medal, is it under the bed?’ A friend of mine woke up, on an airplane and reached into his pocket, and said look at this, it’s your medal.'”

During today’s UFC 170 media event, UFC bantamweight champion Ronda Rousey, told reporters about that one time (or seven) when she lost her Olympic Bronze medal.

The champ also went on to state that she would be O.K. with losing bother her medal and UFC belt because those are just objects. She’s more concerned with what they mean.