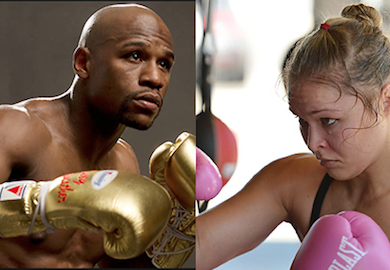 It’s probably true, call me crazy if you want, but Ronda Rousey probably has a decent shot at Floyd Mayweather Jr. in an MMA fight.

It’s all hypothetical, of course. Here is how Ronda breaks down the scrap while on a local L.A. radio show:

Ronda: “I’ll tell you what I’d do. You ready? I would drop down to the ground and crawl over to him as fast I as I can and then I’d grab him by…I would even stand up. I wouldn’t be anywhere near him. I would just do a little army crawl over there. He’d have to run away and I’d be skittering after him, like the one dude in Bloodsport who was doing the whole monkey crawl fight system. I would do that. I would just bear crawl over there, just too low for him to hit me and tackle him down.”

‘Big Boy’: So once you get him to the ground, then that could be it?

Ronda: “Well I spend a lot of time there. I doubt that he does”