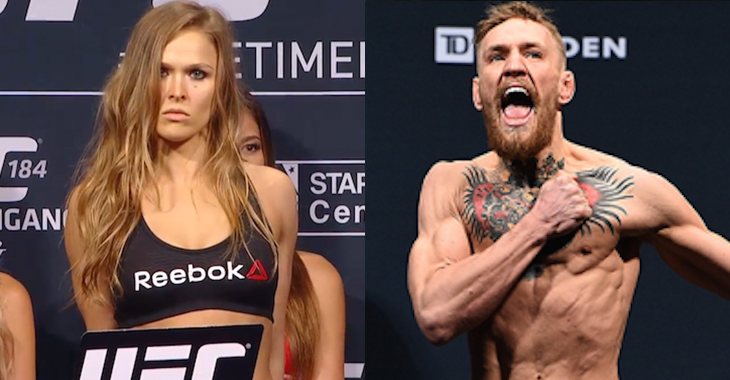 Though it is not confirmed, it is safe to assume that Ronda Rousey and Conor McGregor are the two biggest active draws in Ultimate Fighting Championship.

McGregor made his UFC debut just two months after Rousey defended her UFC Bantamweight Championship for the first time and it’s safe to say Rousey has had her eye on the Irishman for a long time.

“Conor, it’s been a real joy watching him progress and mature as, not just as a fighter, but as a man,” Rousey said. “I’ve seen him grow a lot and I have been very encouraged by what I have seen. I couldn’t be happier for him and the company for winning [the title]. I really appreciate the respect he has shown me and it’s definitely mutual.”

Conor McGregor will be taking some time away from training for a fight to film the upcoming season of “The Ultimate Fighter” alongside Urijah Faber. The two will not fight at the end of the season, and it is expected that McGregor will face Jose Aldo in a title unification bout next.

Ronda Rousey will be defending his championship against Bethe Correia at “UFC 190” in August. If Rousey walks out on top, would you rather her face Meisha Tate next or “Cyborg”? Share your answer in the comment section below!