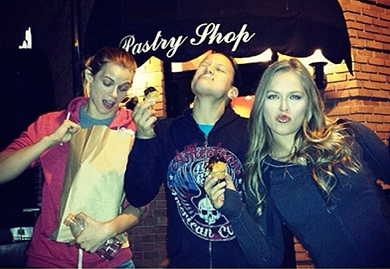 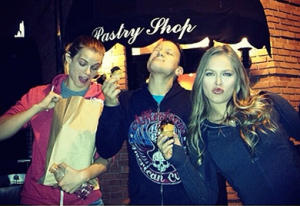 Ronda Rousey will defend her UFC bantamweight title against Alexis Davis at UFC 175 in July. She recently co-hosted “The Fighter & The Kid” podcast with UFC heavyweight Brendan Schaub and discussed a wide range of topics. One of the more pressing issues that came up was the recent antics of fellow UFC bantamweight Bethe Correia.

Rousey didn’t fire off arrogant comments but instead called the move “smart”.

“It’s smart, That’s what they needed to do. … The girls are f–king taking a cue by getting people interested.”

“Shayna called this girl out, and I think Shayna is going to be fighting her next.”

“This chick is undefeated,” Rousey said. “She’s fighting Shayna, so Shayna’s UFC debut is either going to be a huge win for Shayna or this girl is going to be still undefeated, and I’m going to have a huge title fight because this girl is going to have fought both of my girls and is coming after me. That’s a storyline. That’s Shayna’s storyline right now. And either she beats [Correia] and moves on and has a bigger name, or it moves on to be my storyline.”

“I think Shayna can f—ing handle it and will shove this s–t in this girl’s face, but there’s no lose in this situation,” Rousey said. “It’s a huge win for Shayna, or it’s a huge setup for a fight. If Miesha Tate can get a title shot and she hadn’t even won a single match in the UFC, this chick who’s undefeated and beat two of my friends could be a very interesting fight for me.”