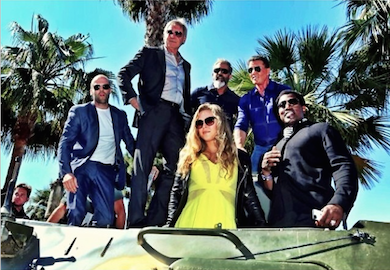 “I remember the first thing we shot with Ronda, I actually got beaten up”, said Hughes. “Ronda’s first time ever on camera was the scene with Sly at a bar, and she’s really super-nervous. I went up and said, “‘Well, what do you do before a big fight?” And she says, “I like to spar in my room. I get that nervous energy out.” And I said, “So you need to hit something? Let’s find something to hit.” And she said, “But I want to hit you.” She was like, “Put your arms up.” And I’m thinking, “Ronda’s just going to do this.” put my hands up, and she goes WHAM! Next day, I was getting dressed and my kids were there at the time, my 7-year-old daughter said “What’s that?” And I had this huge black mark. I had a broken rib. And I said, “I got beaten up by an actress.”

“He didn’t have a broken rib! I didn’t hit anything hard”