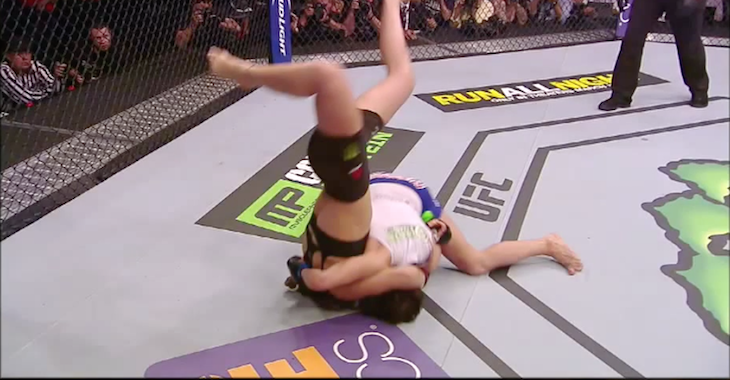 When Cat Zingano rushed Ronda Rousey with a flying knee at the start of UFC 184, and then proceeded to throw Rousey, fans were amazed at how Rousey was able to flip, not letting her back touch the mat.

Rener Gracie, one of Rousey’s Jiu-Jitsu coaches, who recently broke down Rousey’s win (See that HERE), spoke about Rousey’s ability to improvise to get to a dominant position.

“Ronda Rousey’s middle name should be improvisation. That’s her adaptability. That’s how she trains. When we’re training in the academy here on a regular basis, literally every single day she’s spinning and turning and landing in the craziest ways and catching techniques that are totally improvised — but then, if they’re that predictable and they’re that regularly occurring, are they improvised or are they just part of the tornado?”

“As soon as I turned and saw the scramble on the ground, chaos happening, I thought to myself, ‘Oh, Cat’s in big trouble right now.’ Because Ronda thrives in the chaos. She thrives in the confusion because of her extensive years in judo, and it’s amazing what she’s able to do. When other people would otherwise kinda clam up and just do what’s safe, Ronda’s always literally upside-down and twisting and elegantly looking for prime limbs to latch onto and take home and add to the collection.”

“I really think she’s the most naturally gifted and talented athlete I’ve ever worked with in my life, ever, and that’s in any field or any endeavor. I’ve helped professional athletes of all different skills and sports and capabilities, certainly in martial arts and in jiu-jitsu in regards to combat sports, but I’ve never seen an athlete who hones her craft and is perfect for their sport like Ronda is for MMA.”