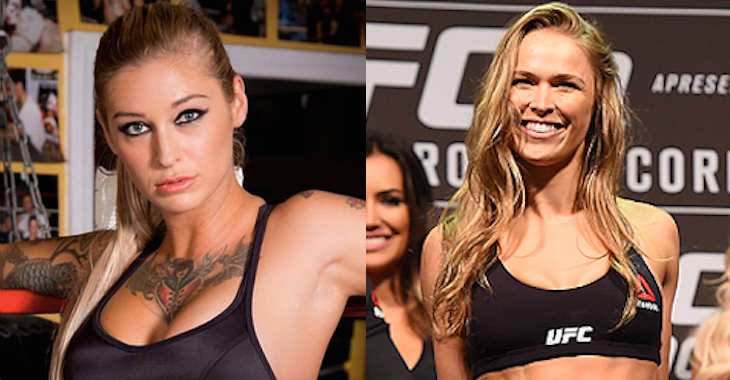 Kleio Valentien may play the role of “Ronda ArouseMe” in an upcoming adult film parody, but she recently confessed she wouldn’t mind taking the REAL Ronda Rousey out around town for a date!

Ronda Rousey’s performance at “UFC 190” helped her break through the glass ceiling in becoming a mainstream superstar. As odd as it sounds, with the level of popularity Rousey is at, it was only a matter of time before a pornography company made a parody film of her. “Ronda ArouseMe” and “Miesha Taint” will apparently be squaring off in a new adult film. Rousey has already spoken out about the film, stating, “It’s funny, I used to hear that in high school sometimes. At least some girl somewhere is paying her bills with it now.”

Valentien isn’t just some actress looking to make a quick buck, though. She claims to truly be a fan of mixed martial arts! “I was really excited about it. I love watching UFC. I used to love watching Pride,” she said. “I grew up first watching boxing and then whenever all of the MMA fights started coming around a whole lot and being publicized, I started watching that. So getting to play a role of a women who is badass and like kicks ass, I’m like ‘yes of course I would love to.'”

She went on to warn that anybody who wants to take the film seriously should skip. It IS a parody, afterall. “But you know, it is a parody, so we also poke fun and stuff,” Valentien explained. “Not like at the people, but play on names and stuff like that. And we also poke fun at the idea of we’re making a parody of this, so we’re poking fun at ourselves as well.”

Rousey probably won’t be going on a date with Valentien any time soon, but she will be dancing with Miesha Tate! Who do you have winning their third meeting? Share your thoughts and predictions in the comment section below!