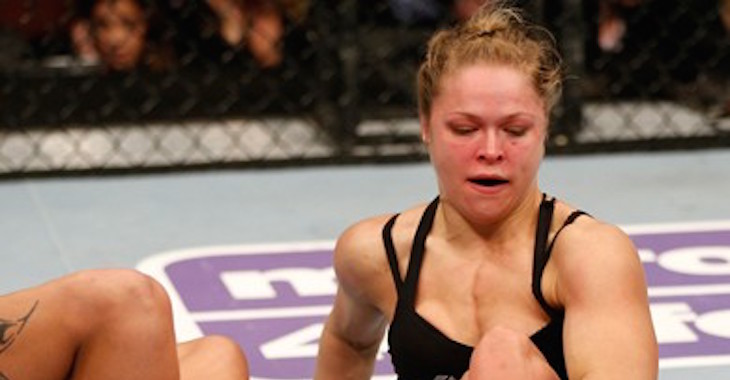 Is there a magazine UFC star Ronda Rousey hasn’t been in? If there is, it’s just a matter of time before she’s on the cover.

Her most recent piece took place in Rolling Stone. In the article, written by Erik Hedegaard, Rousey reveals a lot about her daily routine, dating, background information from fights, and retiring.

Below are a few highlights from the article. Check out the full piece, it’s definitely worth a read.

“The master plan is to retire undefeated,” she says, “and walk away and not have anything left to prove. It’ll be hard to know when it’s time, but it’ll help to have something else to get into, which is why I’m putting time into acting and the book and buying properties.”

“Yeah,” says Rousey. “I trust you. I only have so much ring time that my body can endure. I’ve had four surgeries on my knees, arthritis in my neck, separated my shoulders, broken my nose. I’m just gonna hope that science advances faster than I can deteriorate. Because what am I gonna do? Put a perfect body into the ground? What’s the point of that?”

Rousey on fear of failing:

But then, of course, there’s always the next fight and the next opponent to hate, and hate them she will, because that’s how she wins, and she will do anything to win. “I love heights, love bugs, loved to dig up earthworms, like snakes and slimy things, jumping off things, fire,” she says. “I’m fine with all of it, always thought I’d be great on Fear Factor, because I’d eat that goat dick just like that. It’s the thought of failing. That is my one and only big fear.”

“This one guy, he’s pretty well-known, he keeps texting me to go do this or that, and I’m such a pussy, I won’t say yes. And I want to. But I just pussy out. And then I met this guy at a gas station the other day — we had a moment with our credit cards not working right — and he asked me out. He was cute, but I was just a big ol’ pussy. I was like, ‘I don’t know. I gotta lot of shit, bro.’ I bro’d him, and I didn’t want to.” She sighs. “I don’t know what my problem is, and why I get so shy that I have trouble speaking, when I’m so bold in other areas.” She pops her hand on the steering wheel. “I have an actual issue, I do believe.”