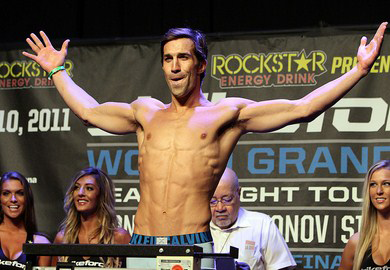 Last night fans got to see Luke Rockhold live up to the promise and hype we expected as he dropped Costas Phillippou with a liver kick in the first round.

Rockhold spoke to Jon Anik after the fight and called out Vitor Belfort, saying he wants a rematch. Later, Rockhold went on to join the rather long list of fighters calling out Michael “The Count” Bisping. Apparently some time ago Bisping and Rockhold sparred, and when Bisping made an appearance on MMA Uncensored Live he said:

“I’ve sparred with Luke Rockhold recently and let’s just say, I’m the unofficial Strikeforce champion. Sorry Luke, but these are the facts.”

Now Rockhold is looking to fight Bisping, who is looking at a return around May once he has recovered from eye surgery. Rockhold went on to say:

“A lot of people are calling him out, but Bisping went on national TV and told everyone that he was the unofficial Strikeforce champion. He called it a joke, and this and that. I say he’s got bad taste, and he needs to pay for it. So, I’d like to get that match.”

What do you think PENNATION? Who would you like to see Bisping fight? Sound off in the comments section.