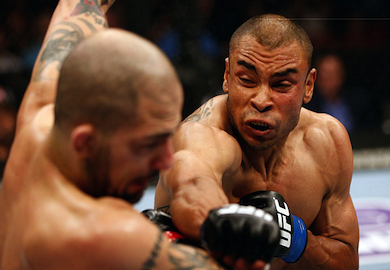 In a statement given to Sherdog.com, UFC featherweight, Robbie Peralta apologized for his recent failed drug test after a post-fight screening came back positive for marijuana metabolites. Peralta most recently fought Akira Corassani at UFC on FUEL TV 9: Mousasi vs. Latifi. Peralta dropped a unanimous decision to Corassani, his first loss in four years.

“I just want to apologize to all my friends, family, fans and to the UFC for what I did. I’m going to have to suffer the consequences, but the main thing is that I apologize to all the people I let down – my coaches, my team.”

“I’ve been going through some emotional things these past six months. When my grandma passed away in March, that’s when I made the dumb choice of smoking. We had the funeral and had a few drinks and started making bad choices. I regretted it the next day, but I’m not here to make excuses for myself. I did what I did.”

“It’s good in a way so that I never make that mistake again. It’s not worth it. It’s not worth [jeopardizing] my career. I have a lot of things going for me right now, and I just have to realize that. All of this is new for me, being in the public eye, this whole thing. I’m trying to get adjusted to it little by little and just keep moving on. I just have to make sure this doesn’t happen again and that I’m stronger mentally.”

Peralta now faces a six-month suspension and a stint in a drug-rehabilitation center for the failed test. As these suspensions go, the punishment is retro-active to the time of the fight which means that he is eligible to return to the Octagon on October 6th of this year.